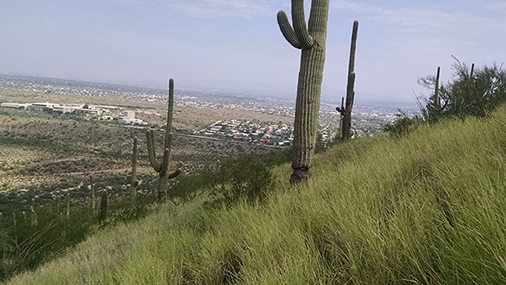 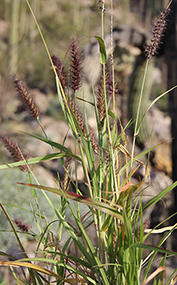 Buffelgrass grows densely and crowds out native plants of similar size. Competition for water can weaken and kill larger desert plants. Dense roots and ground shading prevent germination of seeds. It appears that buffelgrass can kill most native plants by these means alone. Buffelgrass is a very drought-tolerant perennial, so it can remain dense and spread even in dry years. Most of the year, buffelgrass is very dry and flammable, only greening up after rain. Buffelgrass burns hotter than native vegetation, ranging from 1,400 — 1,600 degrees F while native vegetation burns at 400 — 750 degrees F. Buffelgrass evolved in a fire ecosystem and sprouts back from burnt roots. Sonoran desert plants did not evolve with fire and a single buffelgrass fire kills nearly all native plants in its path.

Buffelgrass can be controlled by herbicide and by manual digging. Regardless of the method of control that you use, the actively growing tissue of the crown at the base of the plant must be killed or regrowth will continue in successive seasons. Buffelgrass seeds are viable for 3-5 years, so you must return to your site to deal with the seedlings that will undoubtedly sprout with the next rainfall event.

The preferred herbicide for buffelgrass is glyphosate. Using a backpack sprayer buffelgrass plants can be selectively spot sprayed leaving adjacent native plants unaffected. Glyphosate must be sprayed when the plant is green and actively growing. Herbicide is not effective when sprayed on stressed plants. In southern Arizona, buffelgrass usually enters a period of active growth following the onset of the summer monsoons, from late-July up to the end of October, depending on the length of the rainy season. Most effective results are obtained after the crown at the base of the plant is actively growing in late August. Following the winter rains, buffelgrass can be effectively sprayed between mid-February and mid-April, depending on the rainfall and location. All herbicide applications must be conducted as per the labeling instructions. Glyphosate can be found mixed with various surfactants in many commercially available weed mixes available from many local lawn and garden stores. Addition of liquid Ammonia Sulfate (AMS) enhances the uptake of glyphosate into plants.

Recently glyphosate (N-(phosphonomethyl)glycine), the active ingredient in many commercial herbicide formulations, has been in the news. Conflicting headlines and the vast diversity of media sources has made it difficult to know which information is accurate, which information is being misrepresented and which information is even relevant. We are offering this list of source materials so that you can read the research and make informed decisions.

If we choose to do nothing, and allow buffelgrass to spread throughout our public lands, we are choosing to allow our saguaros and other cacti, our palo verde and ironwood trees, our spring and summer wildflowers, and virtually all of our native plants to disappear from these landscapes.

Volunteer groups led by the Arizona Native Plant Society and Catalina Buffelslayers are active in eradicating buffelgrass on Ironwood Forest NM, the Catalina Mountains, Pima County roadsides, and A Mountain.

Mechanical control is simply digging it up! Note that mowing, as a stand-alone treatment for buffelgrass control, is not recommended, as it is likely to further the spread of the grass. The choice of tool for digging up buffelgrass depends on the environment. In rough, rocky terrain (e.g. the Tucson or Santa Catalina Mountains) a digging bar or pickaxe is essential. In a city park or your own backyard, a shovel may work well.

Digging up buffelgrass results in a large pile of buffelgrass — what do you do with all those buffelgrass plants?! Thatching the uprooted plants over the exposed soil is encouraged and has been shown to inhibit seedling establishment. Thatching simply means layering the pulled plants over the ground where the buffelgrass was uprooted. Care needs to be taken however if pulling along roadside or other areas where piles of buffelgrass could pose a safety hazard. Buffelgrass seeds are viable for 3 — 5 years, so you must return to your site to deal with the seedlings that will undoubtedly sprout with the next rainfall event. The good news is that seedlings and young plants are much easier to dig up than older, mature plants. Digging up buffelgrass is an effective control method that can be employed year-round on most sites. Of course, the digging is easiest when the soil is moist and temperatures are cool, making the late fall, winter, and early spring months the favored times for this method in southern Arizona.

Volunteer groups such as Sonoran Desert Weedwackers and the Catalina Buffelslayers are active in controlling it in areas such as Tucson Mountains Pima County Park and Catalina State Park.

Buffelgrass is native to South Africa. It is one of the many South African grasses that have been introduced as cattle forage in tropical and subtropical regions of the world, including the United States. It was introduced to the United States in the 1930s for erosion control and livestock forage. It was planted in a variety of locations in southern Arizona from the 1930s to the early 1980s.

Records from natural habitat were sparse until about 1980 when it began a rapid expansion. Few people other than botanists noticed it in Arizona before about 1990. Today it is rare to not see it in the southern half of the state, and expansive infestations are becoming more common.

Throughout its native and introduced range, buffelgrass is cultivated, and it has become invasive in Australia, North and South America, and many islands in the Pacific Ocean (including Hawaii), Indian Ocean and the Caribbean Sea.

Buffelgrass was introduced to the United States in the 1930s as livestock forage. It was in planting trials at the Soil Conservation Service nursery in Tucson from 1938 to 1952. Several experimental plantings were done beginning in 1941 at Aguila near Phoenix. Most did not do well. (Another planting in Avra Valley west of Tucson in the early 1980s also died out where it was planted on flat ground.) Records of collections in natural habitat were sparse until about 1980 when it began a rapid expansion. One example is Organ Pipe Cactus National Monument, where buffelgrass was rare before 1984 (Felger 1990). By 1994 it had occupied 20-25 square miles and was expanding rapidly. Few people other than botanists noticed it in Arizona before 1990. Today it is difficult not to see it in the southern half of the state. Native to the Old World where it is widespread in Africa, the Middle East, Indonesia and nearby islands, and tropical Asia. Introduced to Australia and the New World.