Sahara mustard (a.k.a African mustard, wild turnip, mostaza del Sahara, etc.) is a fast-growing, drought-tolerant winter annual that prefers sandy soils, yet can invade a wide range of soil types [1,2]. The species normally form a basal rosette of divided hairy leaves, which can span more than three feet in wet years [3]. The nearly leafless flowering stems branch profusely and grow to a height of about two to three feet, creating the appearance of a shrub from a distance (Fig. 1). The small light yellow flowers are self-pollinating [4], but out-crossing between individuals likely occurs [5]. Each of the thousands of flowers sets a seed pod. Large plants produce up to 16,000 seeds according to one study [6], and likely can seed even more. Dried plants break off at the base and tumble like Russian thistle (tumbleweed, Salsola tragus), spreading seeds rapidly across the landscape [1]. When wet, the seeds are sticky with mucilage and can be transported long distances by animals and vehicles [7]. Its native range covers most of the Mediterranean coast, middle east, and western central Asia [2]. Its distribution in North America ranges from California and Baja California coast to western Texas, and from southern Utah to southern Sonora (Fig. 2) [2]. 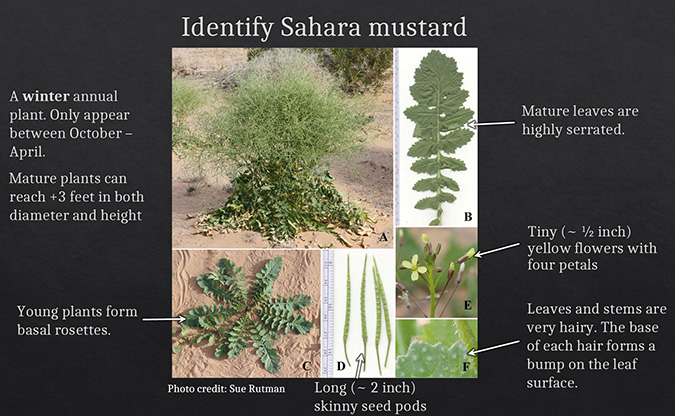 Fig 1a. Several unique characteristics of Sahara mustard can be helpful for identify this species. The mature leaves of this species are highly serrated and have dense and highly visible warts (trichomes). Its aggressive growth often makes it the largest annual plants (+3 feet in both diameter and height) visible in sandy soil. Illustration used with permission from Sue Rutman [23]. 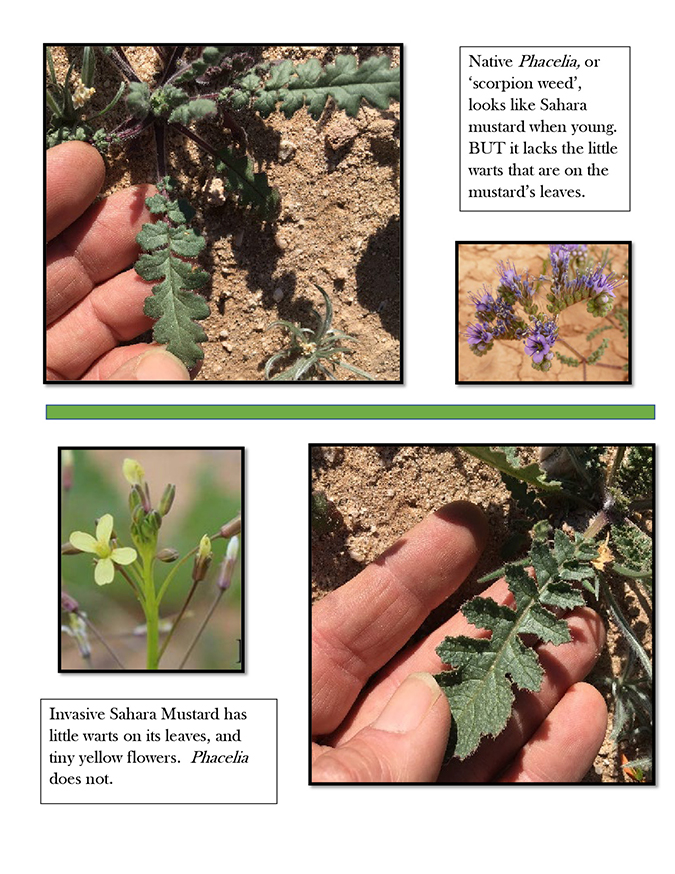 Fig 1b. Sahara mustard may sometimes be confused with the native Phacelia species. One can tell these two species apart by the highly visible (and touchable) warts that are present on leaves of Sahara mustard, but not of Phacelia.

This winter annual species grows fast and large when soil moisture is abundant, smothering native herbaceous plants for light and soil moisture. Both native annual plants and arthropods declined following population increase of Sahara mustard in Coachella Valley, CA [8,9]. The famous wildflower fields of the sandy valleys of Lower Colorado River Valley can be in danger if Sahara mustard outcompete native species over the long run [3].

In arid regions with regular summer rainfall (e.g. southern Arizona), seed banks of Sahara mustard can be weak because of the combination of high percentage of seed germination and low seed survival [10]. Weak seed banks can create boom-and-bust cycles among local populations of Sahara mustard following consecutive years of wet or dry winter and spring [11]. For example, Sahara mustard population on the Mohawk Dunes in southwestern Arizona boomed after a wet winter-spring in 2005, but crashed after three dry winters (2010-2012) [10], and only partially recovered after two wet winters and springs in 2019 and 2020.

Sahara mustard seeds can reach near 100% germination in saturated soil [10,12]. Its tendency of aggressive germination creates excellent opportunities for controlling this invasive annual in years of wet winter and spring. Removing germinated individuals in wet years can remove almost the entire local population of Sahara mustard. On the contrary, some exotic winter annual species {e.g., the Mediterranean grasses (Schismus species)} germinate conservatively, forming persistent seed banks similar to most of the native desert annual species [10]. Population control becomes difficult as a high percentage of seeds stay in the soil.

Short-lived seed banks of Sahara mustard can lead to boom-and-bust cycles of its local populations. This pattern provides opportunities for large-scale containment of its invasion.

Controlling efforts can focus on locations with reliable water availability that supports high abundance of Sahara mustard even in relatively dry winter-spring seasons [11]. Examples of these locations include roadsides (where water draining off the road concentrates), sand dunes (where water seeps deep into the sandy soil), and washes (where water concentrates from the local watershed). Removal of persistent populations in these areas reduces the chances for these source populations to re-invade areas where Sahara mustard abundance has declined due to dry winters [11,13]. Removing Sahara mustard along roadsides also cuts dispersal corridors that facilitate large-scale invasion of this species [13,14].

In Arizona, large-scale control of Sahara mustard has been implemented on the Barry M. Goldwater Range West and Cabeza Prieta National Wildlife Refuge, two adjacent federal lands with a combined size of 1.5 million acres. The U.S. Marine Corps Air Station, Yuma and the U.S. Fish and Wildlife Service implemented an early detection and rapid response program, which has seen success in containing local populations of Sahara mustard [14,15]. Specifically, the program focuses on detecting and eliminating populations that contribute to large-scale, vehicle-assisted dispersal. These populations occur either along roadsides or in prime Sahara mustard habitat that intersects with major roads. Successful containment of these local populations is accomplished after several years of continuous chemical control.

Herbicide treatment is the most effective method of controlling Sahara mustard [16,17]. Because Sahara mustard germinates and grows faster than most of the native desert winter annuals, herbicide application soon after Sahara mustard germination can effectively remove this species while potentially minimizing some of the negative impacts on native species [16]. Nevertheless, detecting species at the early seedling stage can be difficult in practice. When collateral damage is less of a concern (e.g., selective backpack spraying), herbicide treatment can be applied as late as seedpods of Sahara mustard remain green [17]. 2% Roundup Pro (Glyphosate as the main ingredient) or a solution of 1% Roundup Pro and 1% Weedar 64 (2,4-Dichlorophenoxyacetic acid as the main ingredient) can effectively kill developing seeds [18].

When herbicide treatment is not an option, this species can be eradicated by pulling plants before their seeds mature. Green seedpods on pulled plants can continue to develop and produce viable seeds [17]. Therefore, bagging pulled plants or burying them deeply may be an effective way to handle seeding plants. An alternative yet time consuming solution is to remove green seedpods from the plant [17]. Doing so reduces the available nutrients that support seed development after the plants are pulled.

Finding an acceptable biological control agent will be a challenge because many important crop plants are in the genus Brassica [7]. There are also numerous native mustards that might be threatened by a biological agent unless it is extremely host-specific. Preliminary studies suggest some native fungi can specifically kill Sahara mustard seeds, but only over the summer rainy season [19]. This pathogenic effect on seeds may explain low survival rate of Sahara mustard seeds observed in southwestern Arizona [10]. Since summer rain is essential for activating fungi to kill seeds, regions with low summer rainfall (e.g., the Colorado and Mojave Deserts of California) may host Sahara mustard populations that have more persistent seed banks. It may take a long and arduous research journey to develop a technique of using host-specific seed pathogen to control Sahara mustard.

Sahara mustard has a relatively broad climatic niche within the warm arid and semi-arid lands in western North America (Fig 2). It is capable of occupying all three major southwestern deserts: the Mojave, Sonoran, and Chihuahuan Deserts [2,20]. Its presence in the Chihuahuan Desert, nevertheless, is quite limited. Genetic diversity across its distribution range is low, reflecting the plant’s self-pollinating nature, which tends to limit genetic variation [20]. Genetic structure suggests three independent introductions of Sahara mustard to the North American continent, first in Malibu, CA area, then in Coachella Valley, CA, and most recently near Nipomo, CA. These introductions resulted in three genetically different populations of Sahara mustard in North America [20]. The genotype introduced to Malibu, CA is currently the most widely spread population that covers the three deserts, whereas the genotype introduced to Nipomo is thus far restricted to the location of its introduction [20]. 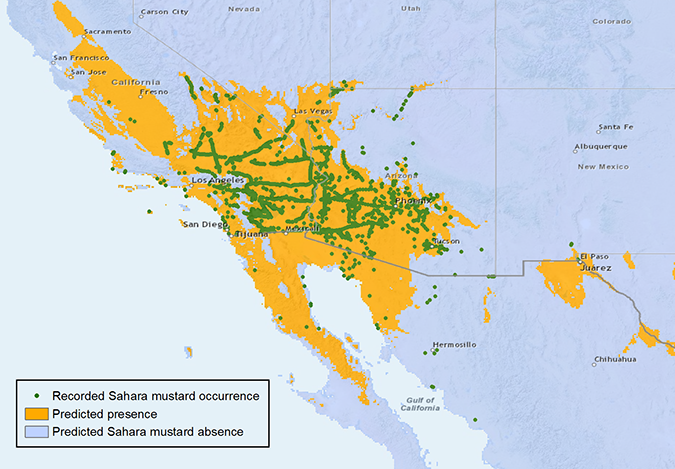 Fig 2. Records of Sahara mustard illustrate its wide distribution in the arid and semiarid region of western North America. Climate niche model can coarsely predict its continental range. Yet, within this range, habitat, dispersal, and interaction with other plants, animals and microbes would greatly influence where this species dominates [2].

Within its suitable climate, Sahara mustard can occupy a wide range of soil types (sand, sandy loam soil, rocky hillside, etc.), yet grow most aggressively on loose sandy soils [1,2,13], likely because its deep taproot can develop fully through loose sand to tap into deep moisture. Nevertheless, not all sandy soils are equally favorable to Sahara mustard. Subtle differences in physical environment, which often are reflected by the association of dominant native vegetation, can affect greatly the possibility of Sahara mustard invasion. Linking classification of vegetation associations with Sahara mustard surveys is a great way to predict habitat suitability of Sahara mustard on a large scale, as what has been done on the Barry M. Goldwater Range [13].

According to herbarium records, Sahara mustard experienced a relatively stable rate of expansion over the North American continent [20]. Its fastest interstate expansion occurred in the 1960s and the 1970s [2]. It was first discovered in Tucson, Arizona in 1968. The 1970s saw the species reaching El Paso, Texas, St. George, Utah, and California coast south of San Luis Obispo (Fig 3). The coastal population in California belongs to a third, most recent introduction [20]. These locations remain as its range boundary in North America till this day. In the 1980s, its continental range boundary expanded further south in Sonora, while its distribution within this boundary also expanded rapidly [2,11].

Anecdotally, in the 1990s, it began rapidly spreading into undisturbed desert habitats, and became a dominant in large areas of the lower elevations of the Sonoran and Mohave deserts. It invaded the Great Basin in Owens Valley, California. Only in the 1990s did botanists and land managers become alarmed about Sahara mustard, but their concern subsided during intervening dry years when it did not appear in numbers.

Since the 2000s, the expansion of the continental range of Sahara mustard has slowed substantially, indicating this species may have reached the limit of its climatic niche in North America [2,11]. Nevertheless, the possibility of further continental expansion remains [2,20,22]. More importantly, rapid invasion over suitable habitat continues within the existing continental range, causing serious management concerns [2,11].

Thanks to Jim Malusa, Sue Rutman, and Daniel Winkler for their contribution to the content presented on this page.