Natalgrass is an erect grass (up to 28" tall) that has attractive long reddish or pink silky hairs on the triangular fruit at maturity, fading to silvery white with age. In the northern part of its geographic range, it is short-lived perennial or annual, but becomes stouter in warmer areas to the south. The branched inflorescences are open (2-3" wide) and fluffy. The leaves are narrow and flat (3-8" long) from unbranched stems. It can flower throughout the year under favorable temperature and moisture conditions but is limited by hard freezes. 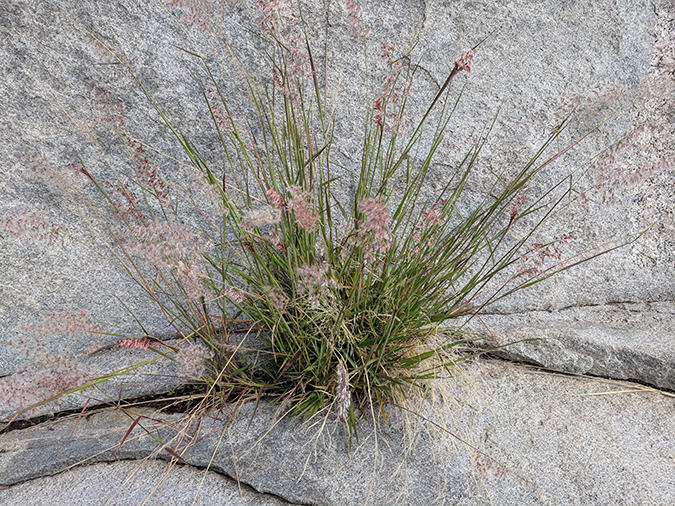 In most areas in the Tucson vicinity, Natalgrass mainly occurs on roadsides and does not present a serious threat to natural ecosystems. But in eastern and north-central Sonora it left the roadsides and invaded natural grassland habitats beginning about 1990. As with Lehmann’s lovegrass (Eragrostis lehmanniana), weeping lovegrass (E. curvula), King Ranch bluestem (Bothriochloa ischaemum), and other non-native forage grasses in Arizona, the introduction of Natalgrass results in changes in the composition and structure of desert grassland, but not conversion to desert-scrub or some other type of vegetation. In contrast to buffelgrass (Pennisetum ciliare), it does not appear likely to invade drier desert habitats in the Sonoran Desert Region in patches dense enough to burn and convert desert-scrub to savanna-like grassland. In Hawaii and some areas on the Mexican Plateau north of Mexico City, recurrent fires in dense Natalgrass stands threaten natural vegetation and native species. It is listed as an alien pest species in Hawaii.

South of Nogales, Sonora, dense Natalgrass stands along the highway right-of-way burns regularly. In one area, a fire spread up a grassland slope and burned hop bush (Dodonaea viscosa) and other shrubs to the ground. It has colonized the canyon bottom and is invading the adjacent south-facing slopes of Pima Canyon in the Santa Catalina Mountains near Tucson. In the Mule Mountains five miles west of Bisbee in southeastern Arizona, it grows densely with velvet mesquite (Prosopis velutina) and ocotillo (Fouquieria splendens) in desert grassland on a south-facing slope very similar to those south of Nogales. It is intolerant of cold and dies back to the base at the first frost. Cold temperatures probably prevent it from expanding into many higher or more northern areas in Arizona. However, its behavior in warmer areas to the south suggests that it is prudent to watch it in the southern Arizona borderlands where many tropical plants and animals reach their northern distributional limits.

Management and control methods are not well known. It should not be planted as an ornamental and should be pulled by hand in areas of conservation concern.

Natalgrass is native to South Africa but is now introduced in the warmer parts of the world, including tropical Latin America in North and South America. In the United States it is mostly found in Florida, west along the coast of the Gulf of Mexico to south Texas, southern Arizona, and Hawaii. It also occurs in Maryland, Virginia, New Mexico, southern California, Puerto Rico, and the Virgin Islands. In Sonora, zacate rosado is common in the Nogales-Imuris area (north-central) and from Tepoca to the Yécora-Maycoba area (eastern). It is locally present in Sonoran Desert in central and west-central Sonora, and southward and eastward into more tropical areas.

Natalgrass is most common in Arizona on disturbed roadsides along paved highways in desert grassland 3,000 to 4,000 feet. In eastern and northern Sonora, and in the Mule Mountains west of Bisbee, it has spread into natural desert grassland. It is less common in the Arizona Upland Sonoran Desert down to 2,400 feet and oak woodland up to 5,700 feet.

In Sonora, it is common in desert grassland northeast of Imuris and south of Nogales (to 4,300 feet), and near Maycoba in the Sierra Madre Occidental in eastern Sonora (to 5,400 feet). It occurs in desert-scrub, foothills thorn-scrub, and tropical deciduous forest from near sea level in the Guaymas area through the transition into oak woodland (3,600 feet) above Tepoca in eastern Sonora.

This attractive grass with its long purplish-pink, silky hairs on the fruit and open inflorescences has been grown as an ornamental. It was grown for forage in the southeastern United States. In the Arizona Flora published in 1951, Natalgrass was only reported in Pima County in the Santa Catalina Mountains near Tucson. Since that time, it has spread into many areas in the Tucson area and appears to be expanding its range in the Arizona-Sonora borderlands.