Giant Reed Grass, also known as wild cane, is a tall, perennial, bamboo-like grass that prefers stream banks and other wet areas. It has the ability to flourish in a wide variety of soils, including coarse sands, gravelly soil, heavy clay, and river sediment. Giant reed attains heights of 25 feet and once established its roots - called rhizomes - form a densely packed floor of fibrous material in which it efficiently stores energy. A single clump typically has hundreds of tough, hollow canes that grow so closely together no other species of plant can take root within and canes grow tall so quickly that they shade-out slower-growing native plants and trees. The canes are capable of growing several inches per day when they have water and heat.

Giant Reed spreads vegetatively through both rhizomes and canes. Rhizomes produce new canes around the edges of clumps. Canes that end up lying on the ground can sprout new roots at each leaf intersection. Rhizomes and canes that break away during flooding events or other disturbance spread Giant Reed, typically downstream.

Canes may remain green throughout the year but usually fade into semi-dormancy during the winter months or in drought. The leaves are dark green and they clasp the stem with a heart-shaped base. Leaves are elongate, 1 to 2 inches wide at the base, and about a foot long. During August and September, giant reed produces a tall, plume-like flower head at the upper tips of the stems. The flowers are closely packed in a cream to brown colored cluster. Seeds produced by the flower are sterile. 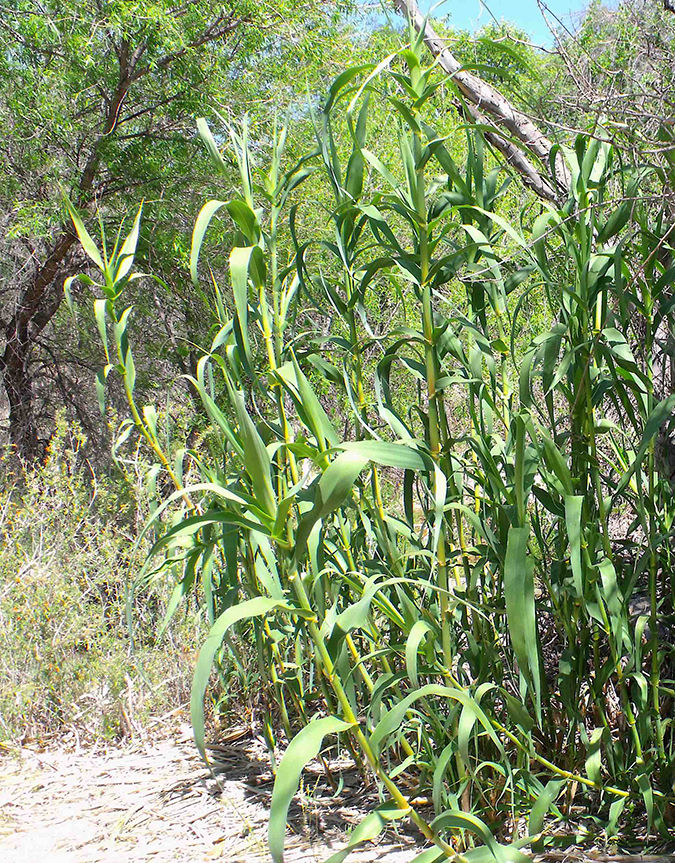 Outside of its native ecosystem, Giant Reed is a destructive and persistent pest. Because of its ability to replace native riparian vegetation, native plant, animal and bird species are threatened. Unlike native riparian plants, Giant Reed provides little shading, leading to increased water temperatures and reduced habitat quality for aquatic wildlife. Its canes are not suitable for perching or nesting birds and no native wildlife eats it. Giant Reed uses more than ten times as much water as any native plant, reducing groundwater availability. It quickly forms dense monocultures that shade-out and crowd out any native species around them, including native trees critical to the health of riparian areas such as cottonwoods, sycamores, walnuts, willows and elms.

Giant Reed produces a great quantity of biomass in canes that go dry seasonally and are highly flammable, leading to the potential for destructive wildfires in riparian areas not adapted to them. The dense mat of rhizomes created alters water flow by blocking sand movement and creating reefs in washes and creeks. It also clogs culverts and other waterway structures such as flood control devices.

There are two proven ways to permanently remove Giant Reed in the Sonoran Desert: manually and with herbicide. The manual method is to dig out and haul away the rhizomes. Digging out the rhizomes involves first cutting and hauling away the canes (to eliminate the re-sprout potential of the severed canes) and then using long-handled picks and shovels to break up the extremely tough and fibrous rhizomes and haul them away. The work is arduous in the best of circumstances but if done thoroughly, is extremely effective. 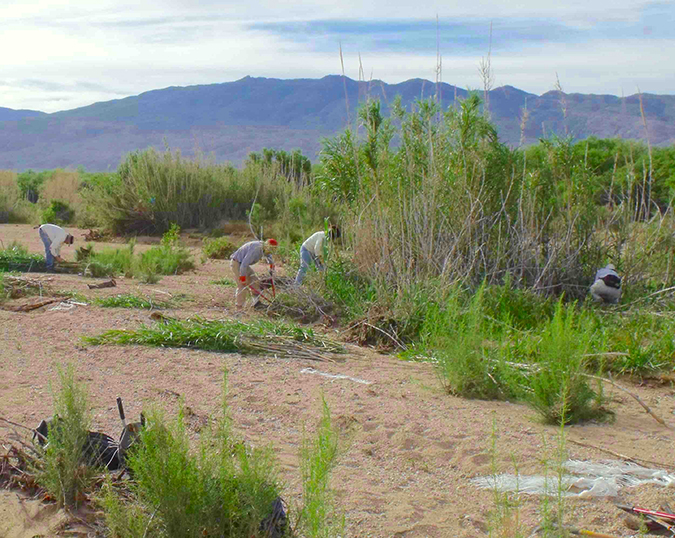 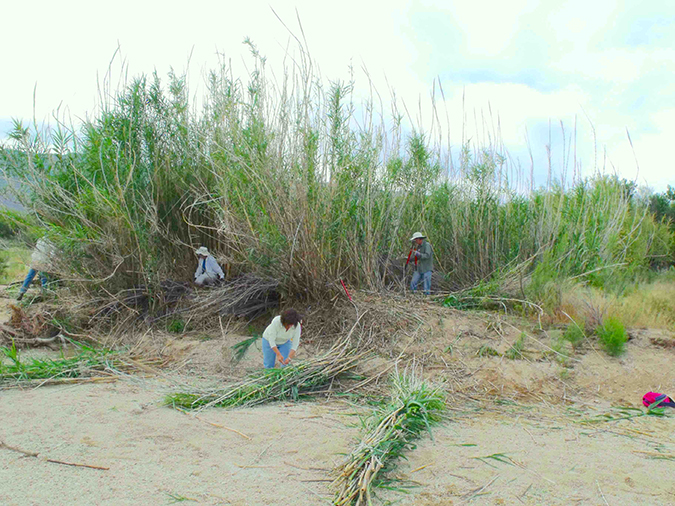 There are two ways to treat Giant Reed with herbicide. Glyphosate has proven to be very effective for Giant Reed, is very low-risk when used as directed and is an unrestricted pesticide, meaning it can be purchased at any store with a gardening aisle. Spraying the green canes with a 5% solution of glyphosate diluted with tap water is one way. (Brown or dormant canes are not treatable with herbicide.) Each cane should be lightly misted completely from top to bottom. The glyphosate penetrates the canes and cuts off a critical metabolic pathway that kills the attached rhizomes. This spray method, if the canes are fully green and actively growing, should result in approximately 90% kill, so a second treatment of surviving canes and any new canes will be necessary during the next green-up cycle for the reed. Read the glyphosate label and use as directed taking care in windy conditions. Glyphosate breaks down quickly in the soil, so it is not persistent or mobile. Its effects will not spread to surrounding non-target plants except by over-spray. Even then, the bark of trees and the tough epidermis of cacti are protective so these native plants are not overly sensitive to a small amount of accidental over-spray. Glyphosate available in water-safe versions for use in standing water.

The second method of treatment is called “cut-stump.” Two people work in a team with one cutting the cane cleanly about 3-4 inches from the ground and the other immediately painting a full-strength solution of glyphosate directly onto the cut completely covering just the cut (not the entire stump). The two critical aspects are using full strength glyphosate, which may involve a special order at a hardware store or a visit to an agricultural supply store, and quickly applying the herbicide within seconds after cutting. This method can be nearly 100% effective if done properly. The cut canes will need to be hauled away.

Cutting the canes repeatedly does not kill or weaken Giant Reed rhizomes. Burning Giant Reed is not a method of control because the rhizomes survive fire. 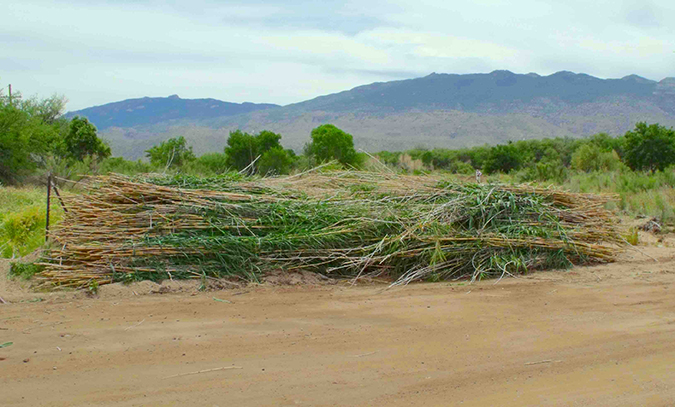 See the following video for a success story of Giant Reed removal in Sabino Canyon.

It was introduced into the United States in the early 1800s, where it was used for roofing material and fodder. Incidentally, giant reed still has a variety of uses in our modern world. Woodwind instruments are made from its culms, for which no satisfactory substitute is known. It is also used in basketry, for fishing rods, livestock fodder, medicine, and soil erosion control.

It was first introduced into the United States in the 1800s. It is used as an ornamental and many varieties of this plant are available from commercial sources. In wild land situations it is primarily a riparian species, but may also grow in areas where the water table is near the surface. This includes roadsides and ditches. The plant grows on a variety of soils at elevations below 5,000 feet. It can grow on steep slopes as well as flat areas.